After more than a month on the sidelines, I finally got out Thursday for some skiing in the King's Hill area to test my conditioning after being injured in a car accident.
My wife and I were in Minneapolis with our 6-year-old grandson in the car when we got struck from behind by a large semi that pushed us into a bus on the 494 Interstate.  We are thankful that all the safety gear worked as intended;  the airbags deployed, the seatbelts restrained us, and the frame, while crunched between two large vehicles, held.
Our grandson suffered only a cut on his head from debris that flew inside the car, and my ribs and legs (from bracing on the brake) took a licking, but Katie's ribs, back and neck really took it as we were banged from the back and took a hit from the front.
Katie and I had our first-ever rides in an ambulance to an Edina, MN hospital where we were X-rayed and examined and Katie had a CAT scan.  Our little guy is having trouble coping with this accident, though.
After a night with Katie's daughter, we had to book a one-way plane ticket back to Great Falls. 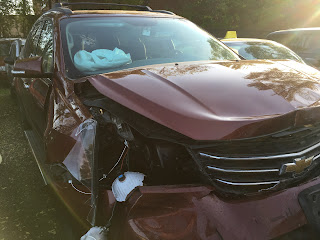 The past three weeks we've been in and out of doctors' offices, dealing with insurances, buying a new car, and coping with our injuries.  I'm healing more quickly than Katie, but find new aches and pains emerging almost every day.  Katie's injuries appear as though they will take much more time to heal.  The tendons that extend from my right calf to my ankle and my left-inner knee have been painful, and that calf feels as though it was whacked with a baseball bat.
I'm very thankful that we survived something so horrible.
I resumed walking almost immediately, but it took weeks before I felt I had recovered enough to try skiing.
We've been both cursed and blessed with snow and cold most of October.  In fact, this has been the snowiest October in history, with more than 3-feet having fallen.  That knocked out the usual mountain trips for color because, particularly on the east side, the color was brief and fleeting.  We felt fortunate to have been able to take one drive to the Seeley Lake area to see the Larch in color, a drive in our new car.
I didn't do too much Thursday, skiing about an hour up to the base of the Golden Goose run at Showdown Ski Area.  I did a few turns on the old Poma Lift run and felt pretty good about what I was able to do.  The tendon in my ankle pulled a bit, but I backed off when the pain started.
The snow was quite good, though a bit icy, although this is quite early for skiing.  With the record snows, Great Divide Ski Area is opening its earliest, today, Nov. 9.
I've got a way to go, but am hopeful this will be a good ski season yet.