On and off piste on Showdown, Trail 747 loop

We seized a day between bitter cold and high winds to practice tele turns and enjoy the Little Belts backcountry on Wednesday.

Showdown has cleared a large area just west of its Meadows ski run that's quick to get to from Kings Hill Pass and almost irresistible on the way to the backcountry.

So we didn't resist and enjoyed an hour's worth of turns in 6-inches of new powder on our way to the 747 loop.

There was sparse snowboard and downhill use of this area that drops straight down from the Porphyry Lookout Road to the Showdown Lodge.

Although the temperature was in the low teens, and there was on and off again snow, there was also on and off again bright sunshine and blue skies on this ski trip.  In fact, big, puffy cumulus clouds fluffed the skies above Porphyry, clouds as one might see in the summer sky.

I was surprised that the ski down 747 wasn't as obstacle-strewn as it was on my last trip down in January after an enormous wind storm blew down trees across the trail.  Deep snow covered much of the debris on this trip.

That new snow clung to the trees creating a magical winter-wonderland effect. 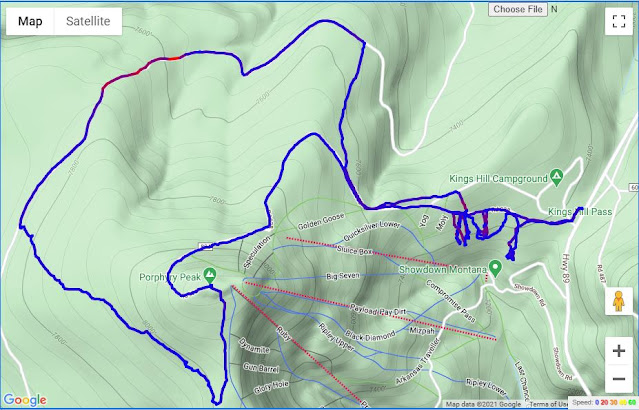