Celebrating the Scapegoat Wilderness at 50

Katie and I got roped into leading one of the official Wild Montana hikes celebrating the 50th anniversary of the Scapegoat Wilderness.

We took five hikers on the 10.5 miles Alice Creek Loop along the Continental Divide Trail near Lincoln.  I threw in an extra mile for those who wanted to look into the Scapegoat itself in the Silver King/Dearborn additions which were part added to the wilderness by the 2013 Heritage Act.

We were surprised by the fair weather and only hazy vistas after a week of intense wildfire smoke.  We were also blessed with cooler temperatures.

It is a hike that we take from time to time in area that had once been threatened by a copper mine.

The hike goes up an old mining road from the Alice Creek Campground for 4.5 miles, where it connects to the Continental Divide Trail.  Then it is a lovely walk east along the trail across a gorgeous limestone cliff, up the little Red Mountain, and down to Lewis and Clark Pass and out at the campground.

We were treated to vibrant Fall colors in the ground cover, particularly the reds of the fireweed, which was copious because much of the area had burned over the past five years.

I really dislike a particular patch of this hike, from Red Mountain down to Lewis and Clark Pass, where you can't avoid large, annoying rocks which made my feet sore.

Along the way we met a young couple resting on their way north to Canada on the Continental Divide Trail, which they hoped to complete in the next couple of weeks before the snows.

After the hike, Katie and I stopped in Lincoln and enjoyed a brief visit with folks at the Wild Montana festivities celebrating the Scapegoat's 50th. 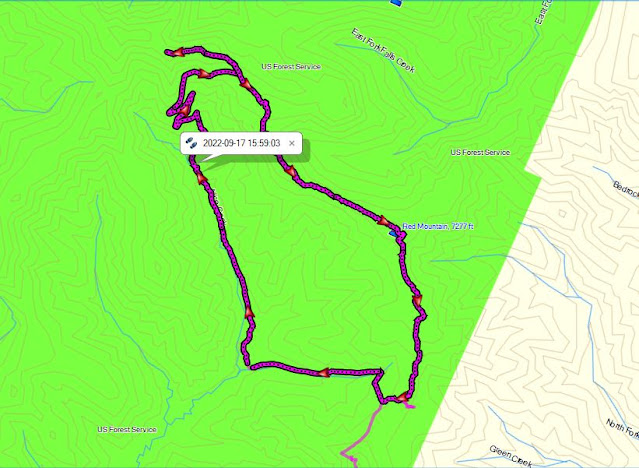