Our January "heat wave" continues and we have taken full advantage with two 747 loop skis in the Little Belts, a couple of snowshoes at Silvercrest, and our first hike of the year in Glacier National Park.

It's not surprising that the Glacier Park trip was the highlight of this active week.

We were joined by Laurie Lintner of East Glacier Park, who proposed walking south shoreline of Lower Two Medicine Lake, which was covered in solid, walkable ice.

Laurie has taken us on several off the beaten path trips in the Two Med area, and this was a dandy.

We accessed the shoreline on the Blackfeet Reservation through the Blackfeet campground at the foot of the dam on the Two Medicine River below the lake.  We walked in our spikes about three mile along the lakeshore crossing over to Glacier Park where open water make traveling further impossible.

The day was overcast, so things appeared to be in black and white.  Looming over us at the head of the lake was the valley's biggest mountain, Rising Wolf peak.

During this past week I skied the 6.2 mile 747 Porphyry Peak loop twice.  The snow was absolutely excellent and the sun was out, making those days ever more enjoyable.

Then, there was the delight of getting Wayne Phillips out for his first outdoors snow adventure since his July knee replacement.  We took him to Silvercrest on snowshoes to the overlook.  He was genuinely thrilled to be out, and to discover that despite his slow recovery, he could handle snowshoes. 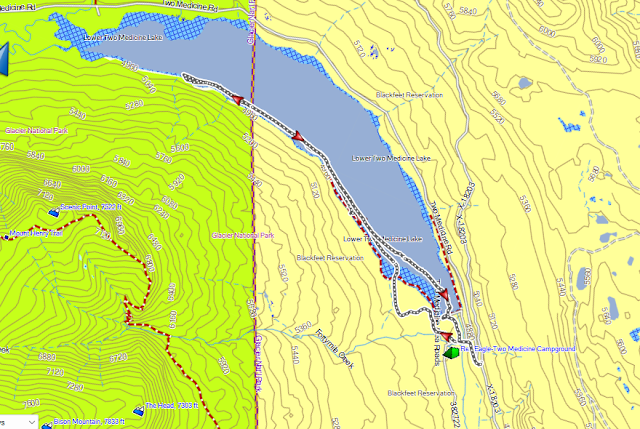