Montana Gov. Steve Bullock gifted those of us outdoor enthusiasts with a loophole in his statewide Covid-19 lockdown by encouraging us to hit the trails and slopes but with social distancing.
I took him up on it on Thursday, heading to the Showdown Ski Area to take advantage of the great new snow we received on Wednesday.
The slopes got about four inches of fluffy powder on top of the ski area's packed powder base.
The ski area closed for the season last week because of the Covid-19 virus pandemic.
April has begun ferociously with not only snow, but temperatures far below average.  Showdown had been below zero on Wednesday.  In Great Falls we were at zero when I left home on Thursday.
The ski hill was a bit warmer, about 14 degrees, but there was little wind and the radiant Spring sun warmed things up nicely.  The sky was bluebird.
I drove up on my own, but Gordon Whirry had also driven solo and I got to do a couple of runs with him before we both headed off in different directions.
I did a couple of runs on the Golden Goose slopes.  We had untracked powder on the north run and there were only three tracks when we first hit the south slope.  I went over to the Quick Silver run and then did a small portion of Big Seven, before returning to Golden Goose.
I saw only four other parties on the slopes.  The others were headed to the top of Porphyry Peak, so we had our slopes to ourselves.
The drive to and from the area was exceptionally pretty.  Belt Creek is beginning to emerge from its icy covering and running fast and clear.  It is surprising how much snow is piled up on the sides of the highway between Neihart and Kings Hill Pass.
I covered about 4.5 miles of skiing and 1,600 feet of elevation gain and loss.
It was wonderful way to grab a break from isolation. 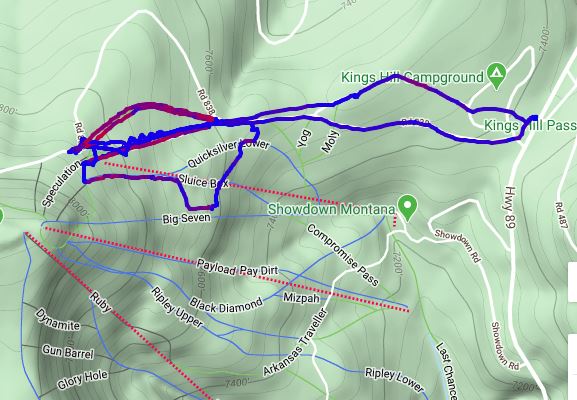