The weather has become spectacular; sunny, clear and not too hot, and we've become manic, climbing Fairview Mountain in the Front, exploring the link between Smith Creek and Petty Creek, doing the Bison Lakes in the Badger Two Medicine, taking a short hike up Devil Lake Trail in the Great Bear Wilderness, doing the Daisy Dean Traverse in the Little Belts and climbing Daisy Peak, and doing the Alice Basin Traverse in the Continental Divide country.
Whew!
I probably should throw in a couple of quick hikes in town on the River's Edge North Trail to the Great Falls lookout above Ryan Dam.
Perhaps the most outstanding of the sights has been the wildflower bloom.  The beargrass is out and I've never seen such a plentiful larkspur bloom.


This is an annual trip, sometimes led for the Montana Wilderness Association.  We cancelled our led hike this year because of Covid, but met friends at the trailhead for the walk through Willow Creek Falls and on a ridge between the mountain and Fairview Plateau.
The day was overcast and with a slight breeze and the hike was easy and pleasant, an annual early summer favorite.  We did this on the first day of summer 2020.

This is something I've been wanting to do for 20 years, but haven't found the time to accomplish.
It is the link between Smith Creek and the Crown Mountain trail.
It is a short hike of just about 2.5 miles one-way from Smith Creek on the Front.  It looks like an old road that is now an overgrown trail in the trees.  There are some great views of the mountains below Welcome Pass.
I was checking this out for a potential backpack trip this summer that would start and end at Smith Creek, going up through Welcome Pass and coming down from Crown Mountain via Petty Creek.
I was struck the resource intensive and industrial quality of the ranching operation in the Smith Creek drainage:  logging, roading, cattle. 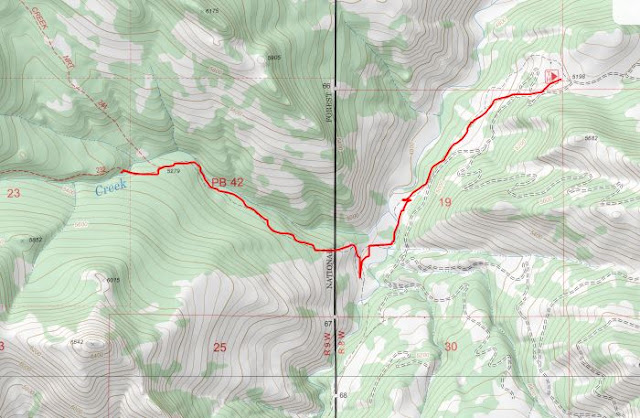 
Although Glacier Park is shut down by Covid, we just had to see it, and also check out our favorite Glacier community --- East Glacier Park.
The Blackfeet aren't permitting non-residents to enter the Park on the East Side, extending this prohibition for the entire tourist season.  It should protect the Blackfeet, but it kills tourism and using the best park of the park this summer.  Businesses are boarded up, with the exceptions of the Whistle Stop Restaurant and Serranos.
We figured out the best way to see east side of the park would be to look into it from across U.S. 2 toward the north.
We scheduled a short hike into the swampy Buffalo Lakes, just over the Blackfeet border in the Badger Two Med country.  It offered tremendous views of the south end of the Park, as well as great views of the Badger in full floral display.
After a very satisfying hike, we checked out the Marias Pass entry into the Park for Autumn Creek, but discovered it closed.  Then it was on to the Ole Creek entrance on the Middle Fork Flathead, which was open, where we had a nice picnic.
Then we stopped at the Devil's Creek Campground in the Flathead National Forest on the edge of the Great Bear Wilderness and explored the trail into the wilderness from there.  It leads to high mountain lakes and high peaks.  We intend to return.

Wayne's Walks last year did some of this hike, with a particular emphasis on the Daisy Narrows, where the trail is a walk-through Daisy Creek for 150 feet or so, where the walls of a limestone canyon comes right down to the creek.  It is a most unusual trail.
It's 135-miles to the trailhead, not far from the Martinsdale turnoff on U.S. 12, between White Sulphur Springs and Harlowtown.
It is a pretty, rolling ranch country that melts into the low-slung, flat ridges of the Little Belts, with tremendous views of the Crazies and Bridgers.
The approach to the start of the Daisy Creek Trail is lots of deadfall timber and land that has been used hard by cattle and motorized vehicles.
Despite signs and fences, motorcycles have gone right down through the Narrows.
I left my shoes on through the Narrows and once I got through decided to do the loop around Daisy Peak (elevation: 7,781 feet), choosing the tight Mud Creek Canyon for my descent.
Instead of using the trail/road to climb the peak, I went right up the north face from Trail 619, using an overgrown road, littered with deadfall, to the top, passing through a crack in the north-facing stone cliff beneath the grassy mountain top.
The devastation of the road down to the the Mud Creek trail was beyond belief.  ORVs, motorcycles and jeeps have churned up the road, leaving an unsightly and environmentally damaged mess.
While I enjoyed the mountain top, the Narrows, and the serenity of Daisy Meadows and meadows in the Mud Creek, I was turned off enough by this damage so thoroughly that I'll never return. 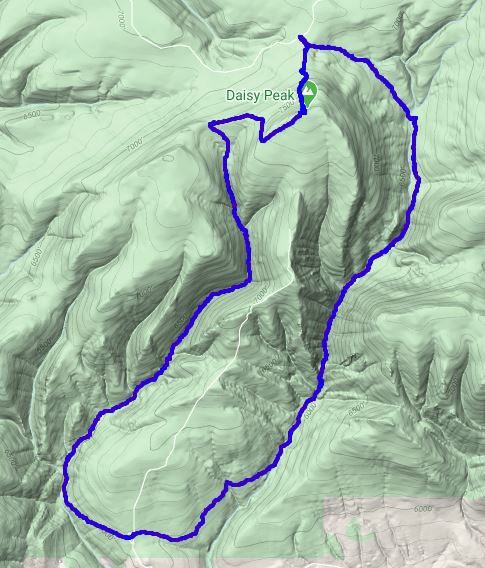 We had planned a climb of Steamboat Mountain in the Front, but when we reached the Elk Creek access road, it was closed because a rain storm had swamped it.
That left in a quandary about what to do.
We decided to drive through Rogers Pass and drop into the West side and do the Alice Basin Traverse, which ascends from a campground to the Continental Divide Trail.
I hadn't done this wonderful loop since before the 2017 fire that burned more than 20,000 acres.
I recommend doing the hike clockwise, as we did Friday.  The trail begins through a metal gate heading west on what used to be an old mining road.  Luckily, environmentalists battled a proposed mine there and it went nowhere.
This part of the basin was entirely burned in that fire, but it opened up views of the Continental Divide and the area was filled with wildflowers, particularly fireweed.
It switchbacks 4.5 miles and 1,900 feet to its connection with the CDT, offering breathtaking views of a long band of cliffs.
Once on the CDT we walked along the top of these cliffs and even ascended a small Red Mountain, (elevation: 7,217 feet) along the way.  From there we could see more of the CDT toward the big Red Mountain, at 9,411 feet, the highest point in the Bob Marshall Wilderness Complex.
Besides the cliffs, we were enthralled by the floral display. I've never seen so many purple larkspur in one spot!  The cliffs were covered by the yellow Wall Flower, from the mustard family.
The hike descends to Lewis and Clark Pass, which the Corps of Discovery passed through in July 1806, with the help of local Indians.  The final two miles is in grass below the emerald Green Mountain. 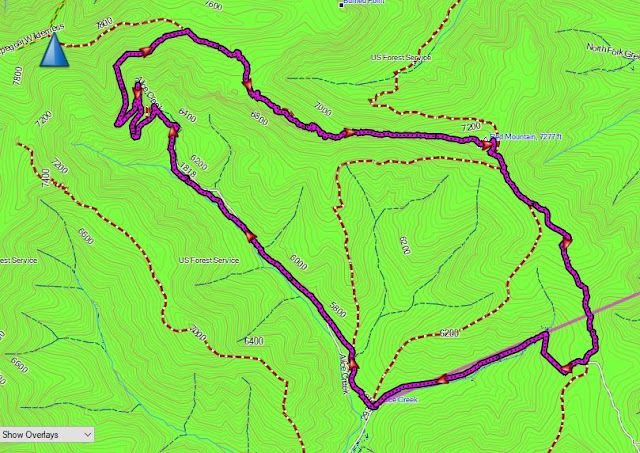