Down into the West Fork Teton hole (and back)


The weather forecast couldn't have been worse, the snow everywhere else couldn't have been deeper or more unskiable, but Monday I found the West Fork Teton country in the Rocky Mountain Front about perfect.
Mark Hertenstein and I teled into the "hole," some 850 feet and 3.2 miles down to the West Fork cabin along the upper forks of the Teton River.
The Little Belts, where we normally ski when the snow flies, had way too much snow to move about in the backcountry ---- some 47 inches fell in the past week.
The forecast for the Teton country was for high winds and 10 below wind chill.
I'm glad we went anyway.
We found a slight breeze, about 20 above, and clouds that opened into blue skies, revealing "sucker holes," on the horizon.
The surrounding mountains, particularly Mount Wright and False Lockhart really popped under snow cover.  Something about the atmosphere made them seem even bigger than they are, and these are a couple of the biggest mountains on the Front.
When the sun emerged it cast the surrounding ridgelines in a golden hue.
After reaching the divide between the Teton Pass Ski Area and the West Fork we headed off into the "ghost" forest of burned trees, working our way to the North Fork Teton bottom willows.  The creek was running fast and open where I would have expected a coating of ice at this time of the winter.
The banks of snow on the river were dramatically sculpted by the water and wind.  Some furry pussy willows shown.
While skiing through the burned timber we were encouraged by all the new, mostly lodgepole pines that have grown up since the big fire of 2007 swept through and scorched this area.
I consider the high Teton country, of which this is a part, the heart of our world-class Rocky Mountain Front. 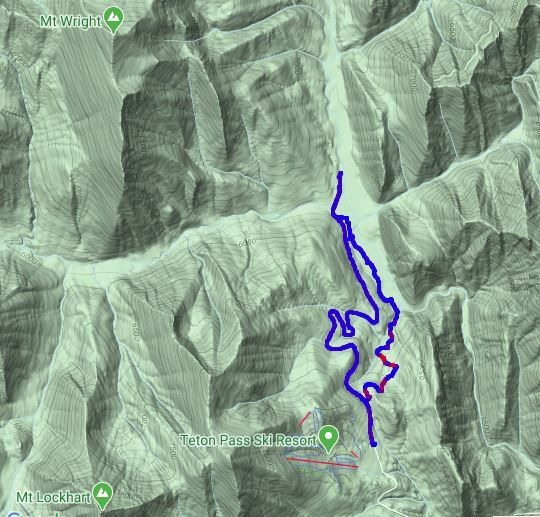