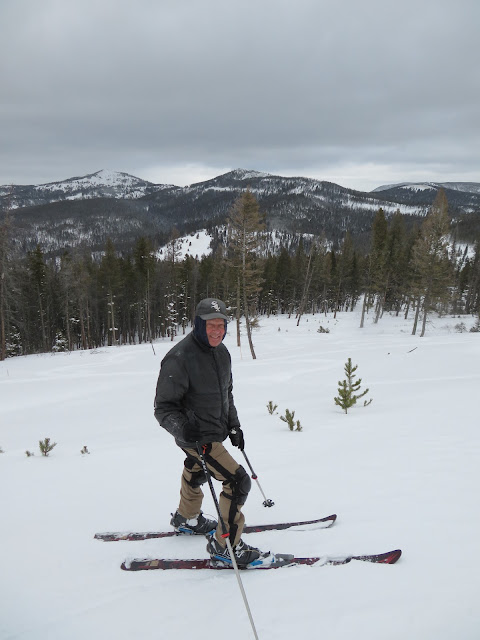 Never did I think I'd be looking around for LESS snow.
That's what happened Saturday after the Little Belt Mountain received some 37 inches of new snow in the past week.
For a backcountry skier that's virtually impassible.
I checked the Teton country, but it was getting new snow and wind.
So, I had heard that there was a reasonable amount of snow at Stemple Pass and that's what we settled on.
There was lovely snow, so we had a wonderful day.
We set out for Granite Butte Lookout, but got only half-way because high winds had blown the snow off the ridgeline, which we needed to make this lookout over this Continental Divide country south of Lincoln.
We could have taken an old road to the base of the lookout, but there was too much wind on that route, and the higher trail offered more protection in the trees.
What we discovered on the trail were tons of other places for good off-trail and telemark opportunities.
After exploring the trail a couple of miles and enjoying the wind-sculpted snow, we headed back and stopped for an hour of telemark turns in a large, open area of great snow.