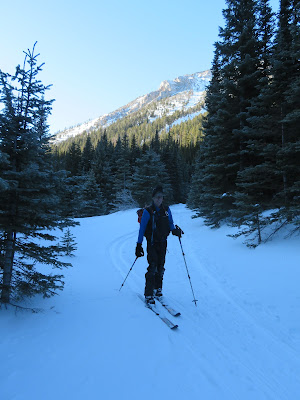 I've sure enjoyed the open days with their blue skies and warm winter temperatures, but gosh, we need snow and we need it badly.

I confirmed this Friday with a trip to the Front for a ski on Waldron Creek.

I've never seen the winter road to the trailhead so clear and free of snow at this time of year.  We didn't encounter much snow at all until we reached the North Fork Bridge.

Approaching the Front the road was entirely snow free and the foothills as well.  We started seeing some snow on the road at about Clary Coulee.

The snow we had on Waldron Creek was deep and good, but could use some refreshing.

We did the 4.5 miles roundtrip, gaining about 1,300 feet to the lower Waldron Bowl beneath Mount Lockhart.

I was surprised by seeing six other back country skiers in the parking area ---- hot shot young skiers headed for the upper bowls on their AT gear.

The trail had been pretty heavily traveled, which caused me some traction problems on my no-wax scales. About half-way where the various branches of the North Fork Waldron come together there were ski and snowshoe tracks in all directions.

We opted for a south side of the creek ascent to the bowl rather than the traditional north side route.  I was pleased to find some of the best snow of the day, and really interesting scenery, the mounds of snow to the creek, the snow bridges and the occasional open ponds of water revealing the fast-flowing creek.

We lunched in the trees and teled our way down ---- rapidly ---- this time on the north side of the creek.

The Teton Pass Ski Area was open, but we didn't see many cars.  One female skier stopped to chat and said the skiing was good, but she, too, said it needed more snow.